John was the son of Zebedee, the fisherman, and the younger brother of James. Jesus called both of them as His disciples.” (Jesus) saw two other brothers, James the son of Zebedee and John his brother, in the boat with Zebedee their father mending their nets, He called them.” (Matthew 4:21)

They were known for their quick temper and Jesus nicknamed them, “The Sons of Thunder.” “John answered and said, ‘Master, we saw someone casting out demons in your name, and we forbade him because he does not follow with us.’” (Luke 9:49) Jesus said to him, “Do not forbid him, for he who is not against us is on our side.” (Luke 9:50)

James and John were prejudiced against the Samaritans. “They entered a village of the Samaritans, to prepare for Him. But they did not receive Him, because His face was set for the journey to Jerusalem. And when His disciples, James and John saw this, they said, ‘Lord, do you want us to command fire to come down from heaven to consume them?’ Jesus said, ‘The Son of man did not come to destroy men’s lives but to save them.’” (Luke 9:52-54)

After Jesus was crucified, John provided for the care of Mary, the mother of Jesus. “When Jesus therefore saw His mother, and the disciple whom He loved standing by, He said to His mother, ‘Woman, Behold your son!’ Then He said to the disciple, ‘Behold, your mother!’ And from that hour that disciple took her into his own home.” (John 19:26-27)

Church tradition says that late in John’s life he became the bishop of Ephesus and died there in AD 100.

John wrote five books of our New Testament: the Gospel of John, 1st, 2nd, and 3rd John, and the Revelation. It is believed that I John was written from Ephesus in AD 90 before John was exiled on the island of Patmos.

John was the last of Jesus’ twelve original disciples. There were many inaccurate stories about Jesus’ life which were circulating through the Roman Empire, and John was determined to set the record straight. Since no one else had the relationship with Jesus he had experienced, he was uniquely qualified to tell the story of Jesus life. “That which was from the beginning, which we have heard, which we have seen with our eyes, which we have looked upon, and our hands have handled concerning the Word of life – the life was manifested, and we have seen and bear witness, and declare to you that eternal life that was with the Father and was manifested to us – that which we have seen and heard we declare to you.”        (I John 1:1-3) (For a message on I John 1:1 go to daleyerton.com and click on resources and click on lesson 4 of “Authentic Christianity.”)

John was concerned about the problem of false teaching. He was the disciple which was known for his special relationship with Jesus. Five times in the Gospel of John he writes that he was “the disciple whom Jesus loved.” (John 13:23, 19:26, 20:2, 21:7 and 20) “Now there was leaning on Jesus’ bosom one of His disciples, whom Jesus loved.” (John 13:23)

As an old man approximately 75 to 80 years of age, John writes with the wisdom, authority, and affection of a father. His book reminds us of the wisdom literature of the Old Testament. He writes in the couplet style of the book of Proverbs. This is the only book in the New Testament written this way.

The apostle Paul writes like a lawyer reasoning with us to convince us why we should believe. John doesn’t write this way. He writes like someone who knew Jesus personally. It is easy to see the different personalities of these two apostles and their different experiences from their style of writing. John uses a simple, mystical, direct approach, whereas Paul uses a complex argumentative approach. This is what makes their writings to genuine and authentic. 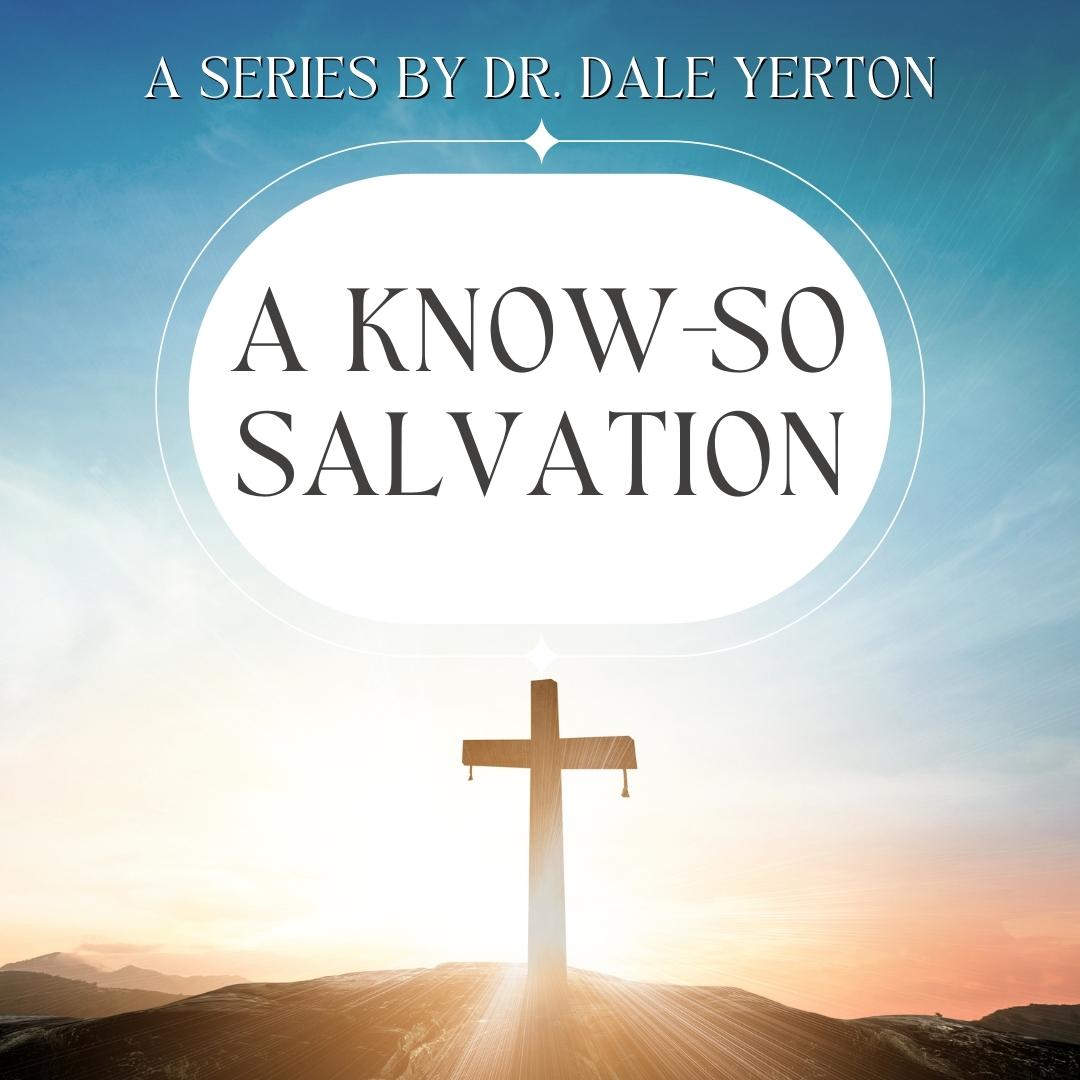 No reviews of A Know-So Salvation
Leave First Review

Reviews for A Know-So Salvation

There are currently no reviews for A Know-So Salvation